We don’t usually start our weekly updates by quoting Paul Ryan, but this time he said it best: “Obamacare is the law of the land.”
On Friday, you achieved something no one imagined was possible: you stopped Trump and Paul Ryan from taking health care away from millions of Americans. They thought it would be easy—but then you showed up.
An insider’s account of how you defeated Trump’s top legislative priority. As former congressional staff, we can tell you exactly how this went down. Trump and Ryan were in a bind. With no Democratic support, they needed to pass a bill that would satisfy both the extreme right and the purple-state Republicans. Your constituent power, asserted week after week over the last few months, ultimately made this political calculus impossible.
Your relentless constituent pressure ensured that TrumpCare was deeply unpopular before it was even introduced. That unpopularity made it easy for the far-right Republicans to oppose the bill. Ryan and Trump needed those far-right votes, so they tried to offer more extreme concessions to win them over. Those extreme concessions spooked the purple-state Republicans, who started to bolt. Why? Because of intense pressure from their constituents (i.e. YOU). Suddenly, the bill was losing votes from both the far-right and the purple-state Republicans. In a matter of days, the congressional coalition behind Trump’s top legislative priority simply collapsed. TrumpCare was toast.
TrumpCare was terrible, but terrible legislation passes all the time. The difference this time was that you were organized and determined. You mounted a sustained, nationwide resistance that broke the will of the Republican caucus and derailed Trump’s agenda. Politics is the art of the possible, and you changed what was possible. You stood indivisible and it worked—and people will literally live longer, healthier lives as a result.

The Affordable Care Act’s (ACA) survival is a big blow to Trump, but, unfortunately, he isn’t done yet—he’s still got a long list of atrocious policy priorities that he’s trying to get through Congress next. So we’ve still got work to do. Here’s what’s coming up next:

Our latest explainer on the legislative process covers appropriations: the process by which Congress decides how the government spends money. If you’ve been wondering about Trump’s appalling budget proposal and whether he can really get away with cutting things like PBS, here’s a great place to start: Legislative Process 101—Appropriations (or “Keeping the Lights On”).

Get ready for recess

You did amazing work over February’s congressional recess, and we can’t wait to see what you’re going to do next! You’ll get a chance to show off your skills and creativity again from April 8–23. Now is the time to start asking your MoCs when they’re planning to hold town halls during the upcoming recess. If they refuse to tell you, check out our Missing Members of Congress Action Plan, which shows you how to take control of the situation. And we’re busy putting together exciting new recess resources that will be ready for you next week!
Last week's victory was so important—and not only because you saved the ACA, but also because you proved without a doubt that standing indivisible works. Last week we stood indivisible, and we won. And we’re just getting started.
In solidarity,
The Indivisible Team
P.S. We want to amplify your group’s voice! Keep sharing your pictures, videos, and stories with us at stories@indivisibleguide.com. 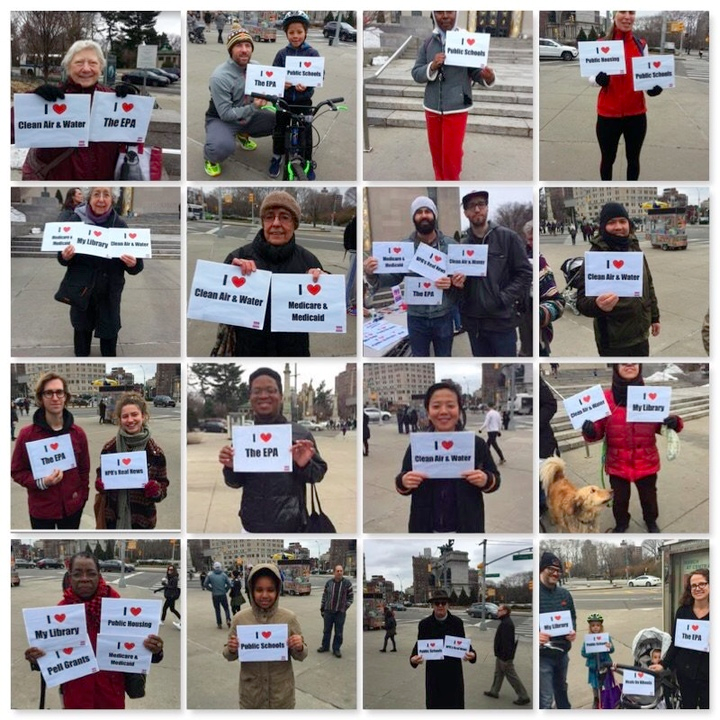 @bkindivisible is standing indivisible against Trump’s budget!
Posted by debv at 12:19 PM