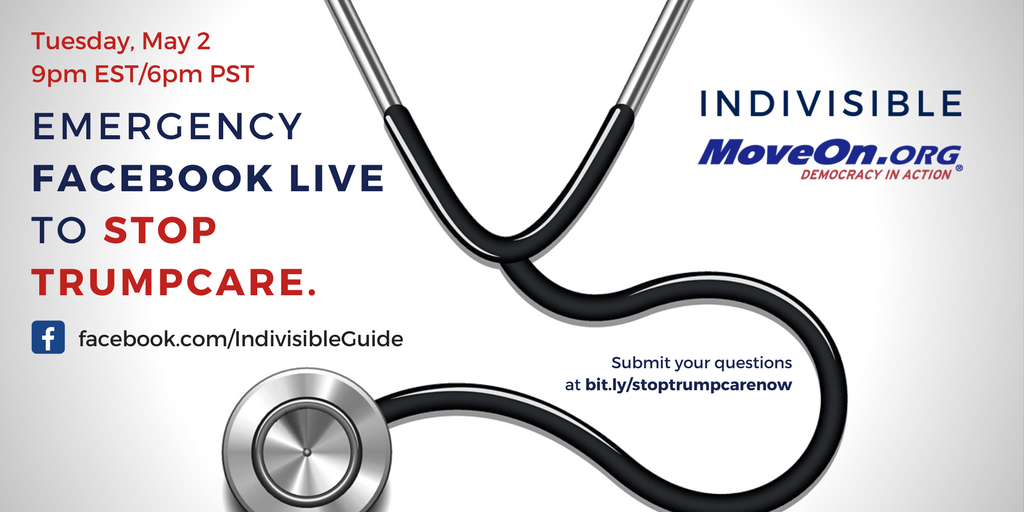 We’ve stopped Donald Trump and Republicans in Congress from repealing the Affordable Care Act twice. Following a congressional recess where you showed up and held your Members of Congress accountable on repealing the ACA, Paul Ryan had to pull the bill from the floor in March because they didn’t have the votes. Trump desperately tried again to get the House to repeal the bill the last week in April, fearing bad headlines over failing to get it done in his first 100 days. Once again, they didn’t have the votes.
They don’t have the votes for one reason: you. Your activism has now killed the bill twice. But Trump and Republicans in Congress aren’t done trying. This is a critical moment. We need to make it clear to Republicans that enough is enough. Help stop TrumpCare once and for all by calling offices and visiting district offices this week.
Join Indivisible and MoveOn at 9 PM ET on May 2 for a Facebook Live event where we will be answering questions about TrumpCare and what you can do to stop it. You can submit your questions here.
In solidarity,
Angel Padilla
Policy Director, Indivisible Project
Posted by Monicapearson97103 at 6:07 AM