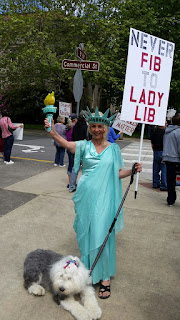 One day, when I was a young woman traveling the United States with a giant suitcase filled with gold, gemstones and pearls and conducting one-day jewelry trunk shows at major department stores, I saw a psychic. I had the whole world ahead of me and I sought those unanswerable answers we crave in our youth: Who or what will I be in the future? What the psychic told me sounded like my hard-earned cash flushing down the toilet. (The session was 100 bucks in ‘70s dollars!) The completely implausible answer was, First I see you in the legal field, and then you will go into politics.

Tell us a little about yourself, including the ways you’re active with Indivisible North Coast Oregon (INCO).
Today I am a retired court reporter who belongs to the Warrenton Indivisible chapter. For much of my life, like “a good woman,” I kept my opinions to myself, which is really easy when you’re sitting behind a stenograph and have attorneys introducing you to their clients as “a piece of furniture.” But I am now elated to say I have finally found my voice at the mouth of the Columbia.

What prompted you to get involved?
Like many others, I went beyond despondent after the 2016 election. I didn’t realize it at the time, but as a victim of sexual assault the whole “pussy gate” scandal, combined with copious amounts of misogyny, threw me into PTSD mode, and I was desperate to keep my sanity. How could this be happening to my country? Indivisible gave me the hope that I could actually get out in the streets and use my newfound voice to “resist” and “persist.”

What’s a highlight of your involvement so far?
One day at our Saturday morning Indivisible meeting our membership decided to join the
Warrenton Fourth of July parade to illuminate not only our chapter but the need to vote.
Somehow, and this part is very sketchy to me, no wine included, we had the idea to use the Statue of Liberty as our foil. With that decision and a $50 credit card payment to Party City, Lady Lib was born. Oh, and by the way, I would model the Liberty costume.

Word travels fast in the world of Indivisible, so my services as Lady Lib have been called upon numerous times since those early days of the Warrenton parade. Lady Lib has showed up for Indivisible rallies and even the Seaside Fourth and Astoria Regatta parades.

What is most surprising to me is the effect this costume and resulting persona has. All of a sudden the world is transformed. People are grinning wide, heartfelt smiles. Their eyes are filled with wonder and love. They want to hug you. They want to touch you, the American Dream: "Give me your tired, your poor, your huddled masses yearning to be free…".

What’s your vision for a better future?
Lady Lib called up the America we carry in our hearts, and it is still out there in massive numbers. So she's taught me that there is great hope, that the American Dream is truly a reality; and I am honored to be a small conduit for that, a reminder of who we really are as Americans. That I would embody "America" dressed as the Statue of Liberty in my 60s... my psychic never predicted that.