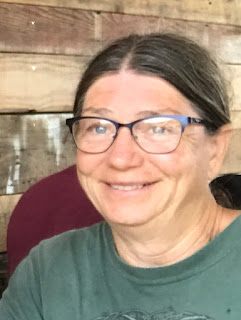 Tell us a little about yourself and the ways you’re active with Indivisible North Coast Oregon (INCO).

A little over four years ago, I moved here to my grey ocean from Ashland, Oregon—a move that took me from south to north and from the mountains to the ocean. I currently live in Hammond, about a block and a half from the tidal Columbia River, along a bike path. It’s beautiful!

I’ve been active with INCO from the start, going regularly to INCO meetings in Warrenton. I’ve also taken part in demonstrations in front of the Astoria Post Office. I’ve called my members of Congress on important issues and written “letters to the editor” that were published in The Daily Astorian. I also marched with other INCO members in both Warrenton’s Fourth of July Parade and Astoria’s Regatta Parade in August. In addition, I do my best to get to most of Warrenton City Commission meetings. As I have a demanding day job, I’m unable to do as much as I’d like.

What prompted you to get involved?

When Trump got elected, I was devastated. Then I heard about the Women’s March. It was the day before my 60th birthday. I was excited to have an outlet for my pain and people to share it with. It was thrilling to see the wonderful turnout. We marched, standing together and setting records along the way. Around this time, I got word of the first INCO meeting, which I attended. I’ve been attending them ever since.

What’s a highlight of your involvement so far?
I’m  happy to have like-minded people to talk with and enjoy meeting the people at meetings and events. It is nice to share space with so many talented and interesting people.

That’s your vision for a better future?


What’s one book, quote, or action that you recommend to everyone who’ll listen?

In light of the current political climate, the bumper sticker on my refrigerator seems to just about sum it up. It quotes Barack Obama and reads, “The best way to not feel hopeless is to get up and do something.” Sometimes, I feel like giving up the fight and crawling off into a corner of my garden forever, Instead, I get up and do something: write a letter, make a call, send an email, check the news, research a Supreme Court decision-- anything to just keep moving forward. Hope is a choice; kindness is a choice. I choose hope, and I choose kindness. I hope you will too.