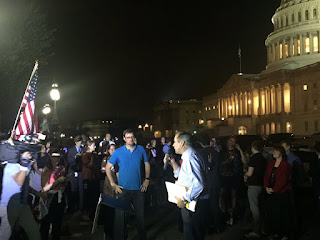 After a long slog, we celebrate news of a real victory on healthcare. Through a movement that’s seven months young, we’ve demonstrated the power of the people in American democracy.

As hard as we've worked saying no to Trump's agenda, we know we must also work to say yes to government by and for the People. Following a first-round Listening Tour, Indivisible National has announced plans for Indivisible 435, a program that articulates a bold progressive vision and empowers us with resources to expand the electorate and bring more people into the electoral process in every one of the nation’s 435 congressional districts.

In coordination with local groups like INCO, this program will include:
“It’s also important to talk about what we’re not going to do,” the national team explains. “We are not going to act as an arm of the Democratic Party. We believe that vibrant independent progressive groups like the Indivisible movement play a critical role in holding both parties accountable and pushing them to be better. And we don’t think that any politician is entitled to hold on to their seat of power if they’re not representing their constituents and doing everything they can to protect American values and communities.

“Our ideas are winning ideas. But we must behave, strategize, invest and vote like we believe in them. This is a critical moment for expanding what is possible for the Indivisible movement. This is not just about winning one or two election cycles, it’s about rising to this historic moment. It’s about recognizing the path that led us here, the path we need to build and the path that will lead us to what is newly possible: a radically inclusive, progressive and bold future led by regular people who are fed up.”
Posted by debv at 7:50 AM