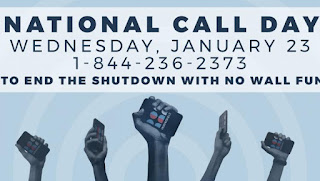 UPDATE: As of noon (PT) on Jan. 25, Trump has said he'll sign the bill the Democrats have been proposing since the shutdown began, funding the government for three weeks while a bipartisan groups works out a compromise on border security. https://www.politico.com/story/2019/01/25/trump-shutdown-announcement-1125529

Wednesday, January 23 is a National Call-In to End the Shutdown. Two votes will come up in the Senate TOMORROW. One moves forward Trump’s xenophobic agenda. The other is a clean continuing resolution (CR) that reopens the government for discussions on border security without government workers being held hostage.


If the clean CR fails, we ask you to write a Letter to the Editor (LTE) calling for a clean end to the shutdown.

Suggestions for your letters:

CONCEPTS YOU CAN USE


TALKING POINTS YOU CAN USE


DETAILS YOU CAN USE